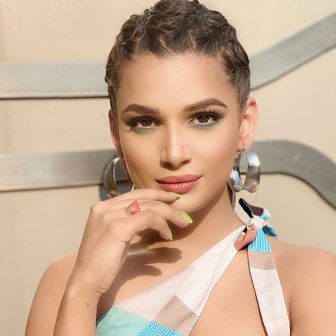 Naina Singh is an actress and model who hails from Moradabad, UP. She was born on 4th March and was brought up at this place only. She did her schooling and college from her hometown and remained active in sports. She played different sports like table tennis, football, cricket, volleyball and basketball. She is a state level champion in table tennis. Her active role in sports led her to participate in the MTV reality show called Splitsvilla 10, later she also worked as an assistant casting director as well.

However, before she participated in Splitsvilla 10, she started working as a model in 2013 and won the Most Stylish Diva from Femina the same year. She then started in the dating reality show – Splitsvilla 10 where she emerged as a winner with Baseer Ali in 2017. In the next year, she was seen participating in the Star Plus talent reality show called India’s Next Superstars where she emerged as the winner.

Her acting career came with the Zee TV drama daily show called Kumkum Bhagya where she played the character called Rhea Mehra. However, in Feb 2020, she left the sow saying that she is not able to relate to the character at all. She concluded saying that she finds the character to be unrealistic and somewhere not justified and thus could play the part anymore. Singh is now gearing up for the next season of the controversial reality show called Bigg Boss 14. She was also in a song called Sundowner. Talking about her personal life, she is single and not dating anyone.