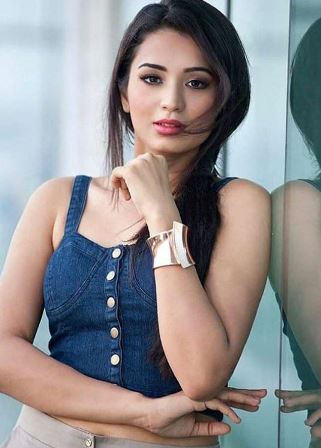 Anjali Barot is an actress and model who hails from Mumbai. She was born on 6th December 1993 in Mumbai and was brought up at this place only. She did her schooling and college from Mumbai. She completed her graduation in Media from Fr. Agnel Multipurpose School, Mass Media, Mumbai University. She was always keen on pursuing a career in acting, hence kept herself busy in doing plays and shows in her college days. She also got the chance to work as a model while she was a student, all thanks to the glam factor in her personality.

After her Bachelor in Mass Media, she headed to be a full time model. She did a number of marketing campaigns for brands like Amazon Fire Stick, HDFC First Home and PayTm to name a few. Also, was seen in ads for companies like Ford Figo, Havells TVC, Godrej Interio and Yamaha Fascino to name a few. She then got the chance to act in a short film called The Move in 2018 thus starting her career in this field. She then got other short movies like Never Ending, Date Night, Anything Will Do, Questions and The Couch to name a few.

She also got the chance to work in web series starting her debut with the series called FilterCopy, followed by ScoopWhoop, and then Wrong Number in 2019, while her recent one include Scam 1992- The Harshad Mehta Story released last month on Sony Liv. Talking about her personal life, she is dating Gaurv Arora and loves hobbies like Travelling, Shopping and Dancing. She is very active on social media and loves to share about her life all the time with her fans.