It’s a tough time though for Shah Rukh Khan and his family as one can see the elder son Aryan Khan is still behind bars in the cruise drug case. He was arrested on 3rd October by the NCB and was sent for custody for one day. However, it prolonged and nothing really happened in the recent hearing as his bail plea was rejected. Since then Shah Rukh Khan has not met his son and has been busy working hard for his bail. Finally the news came when SRK visited the Arthur Road prison in Mumbai to meet his son.

King Khan arrived at the said prison in the early hours of 9 am and soon he was surrounded by the media. He seemed calm and composed as he entered the prison with the authorities. It was SRK’s first visit to his son ever since he was arrested on 3rd October. As per reports published at Rediff.com, it was an emotional father and son reunion at the said jail. However, none of them shed tears when they met. Both Aryan and father SRK remained calm and composed without any tears in their eyes.

Sources at the jail claimed that people expected some melodrama and tears with this meeting but nothing of that sort happened as the half an hour meeting happened on a positive note. We know Shah Rukh Khan as a mature actor and person and he would never cry, claimed the jail authorities and others. He is a good entertainer and knows how to behave in public, feels the experts. Thus it was obvious to get such behavior from both the father and son. Meanwhile we see SRK’s birthday appearing on 2nd November. It is interesting to see if his son is able to return before his Big day or not, only time will tell. Check photos: 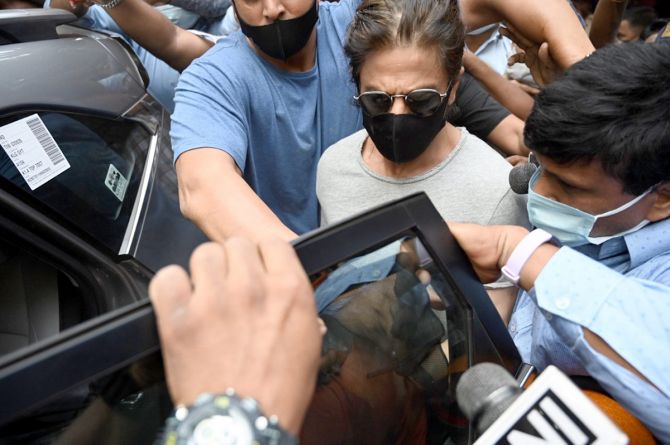 Sara Ali Khan in Orange, her Karwa Chauth Outfit Proving her the best