Bhoomika Mirchandani is an actress and model who hails from Delhi. She was born on 14th December 1993 in the National Capital but was raised in Mumbai as her mother shifted with her to the Maximum City. She did her schooling from Mumbai and was interested in acting since her childhood. She played different roles in plays at school and college festivals and started working in her late teens. She started her professional life working as a model and worked with different brands and companies. 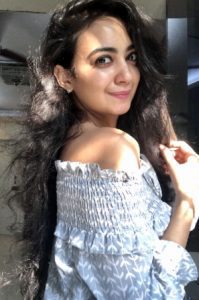 She did a number of ad and marketing campaigns with several brands working showcasing designs and other stuff on the ramps. While she was busy in modeling she got an offer from a TV director for his next TV show Krishna Chali London. The TV show was aired on Star Plus and she played a negative character in it. Her character was applauded for her innocence one can see on her face. She is expected to play a variety of roles. While she continued with her modeling career, she also got the chance to appear in a few music videos.

These include the one called Tu Chaahat Hai of Ankur P Pathak. She gained the chance to come up with the comedy videos and seen working with the defunct Vine app. Talking about her personal life, she is single and not ready to mingle as she is focussing on her career and not such things. She is very active on social media and loves to update about her work and personal life. She is an avid animal lover. Stay tuned to know more about her and others only with us.